Until this past October, I hadn't spent much time in Boston and it was somewhat of a mystery city. Then my daughter got admitted, with a scholarship, to Boston Conservatory. At that moment, when she was admitted, it became clear that no other school was in the running - this was the dream school. She and my husband went to visit to confirm she would like Boston, and done!! In September, off she went.

In October and again in May, I was able to visit her in Boston: in October with my mom, and in May with my husband. While we were visiting her, we also got to see parts of Boston, either with her when she had time, or on our own. I have learned that Boston is full of young people (college central), must be the doodle dog capital of the world, is abounding with different coffee cafes (not just Starbucks), and much more. Its subway system, which people call the T, makes Boston a walkable city - no need for a car. So while Boston is expensive, at least we didn't have to drive.

We walked so many places - from near where Boston Conservatory is, to the North End (Italian), the South End, Cambridge (right next to Boston), and more. Here are some of my favorite places where we walked through nature right in the middle of the wonderful city.

Parks are always my favorite - anywhere. Next to each other right in the middle of Boston are the Boston Public Gardens and the Boston Commons. One of my favorite days was spent walking through the Boston Commons, then up a huge hill to the capital, then down the hill and through the winding paths of the Public Gardens. In October, the leaves were changing colors. In May, green was everywhere. The Public Gardens have little boats called "swan boats" that take people around a somewhat small body of water in the middle of the park - there are pretty views of the garden and the outline of the city from the boats. The gardens are prettier in the spring - there were tulips everywhere in May. Even though it was cold due to the obnoxious wind which seemed to follow us from Colorado to Boston, the tulips didn't seem to mind. They were arranged in big blocks of colors - one area of red, another of white, another of yellow, and so on - perfectly set in rows which almost lined the park paths. In addition to all the green and the tulips, many of the trees have flowers in May - it is a big contrast to Colorado where things are still pretty brown in early May. A place where everyone with kids seems to go in the Public Gardens is a spot with a bunch of duck statues lined up from tallest duck to shortest duck. Kids play on and around the ducks, which are famous in Boston, and seemingly every kid's parents take many photos of their kid(s) with the ducks. Not to be left out of the fun, adults also want their picture taken with the ducks. As I was trying to set up a selfie with the ducks, someone volunteered to take my picture with them. I guess I can check that box - picture with duck statues!

While the Public Gardens has a path that winds through various views of water, over bridges, by the ducks, and so on, the Boston Commons has what seems to be more of a main path through the park, with a few offshoots for things like a softball field, tennis courts, statues, and gazebos - it feels more local. In May, probably because we were at the gardens on the weekend, there were food carts, some entertainment (a guy singing while playing a number of instruments), and a lot more people. People seemed very happy to be enjoying all that the parks had to offer.

Another area we visited briefly in May was the arboretum, near Harvard. It's an area of many different types of trees, flowers, things that are green. It's peaceful - next to a road, but down so the noise of the road falls away. We spent the morning in the arboretum on our last day in Boston, taking the T to a location nearby. There are so many paths to walk, and we do want to return to explore more. It's a place where one could spend a whole day and there are maps showing where things are located throughout the park. It was a bit rainy when we were there, but our time there had the least amount of rain of the day, so we could casually stroll through a paved path one way, and a mulch path on the way back. When a person needs calm, the arboretum is a great place to go. In Boston, I tended to say that "name that calm place" would be an excellent place to read a book, and we joked that I could come up with a book-reading site ranking system. We also joked that I needed to return to these places with my books instead of just talking about it.

A garden area very near to the Boston Conservatory campus is named The Back Bay Fens - it's basically on the way to Fenway Park (historic baseball stadium) from campus, and we found ourselves there a few times. It's a community garden where different people seem to have small plots where they can work and spend time, again right next to a busy road, but somehow the noise of the city fades. Some plots are beautiful. Other plots, nearer to the back, look like they have potential. I wonder what these small plots are like in the summer and imagine they are beautiful.

Lastly, there's the beach. While October and May are not the best times to swim in the ocean, the beaches are still there. We visited a beach in May. It was a cool day and almost no one was there. The tide didn't change much, so there were no huge waves to see, but instead it was a calm scene. As a kid, I remember collecting shells the few times we visited a beach and collecting random shells remains something I love to do. Since there were so few people, it meant that all the shells were there for me to explore. I did come home with a number of them. One of the great things about using walking sticks is that you can poke at things like shells, or move shells on top of the sand, to determine whether they are worth picking up.

The ability to get where I needed to go in Boston was critical to how much I enjoyed exploring the city; being able to spend my energy walking around the parks instead of walking to the parks was important. The subway system (the T) there is impressive. Not many subway stops were missing an elevator which was great.  In addition, like what I experienced in NYC, people in Boston did not feel the need to comment on Bart (my walker), my walking sticks, my ability to climb stairs when an elevator was absent. There were no offers of prayers for me by random people, and when help was needed, it just happened, without a production, without a grand ceremony. Bonus: people actually let me push buttons that open automatic doors instead of leaping in front of me to hit buttons. There was a natural feeling to it all - when at a restaurant, there was a natural flow to where my walker would go - it was not a big deal. I didn't catch people looking at my walker - people looked at me. It was very different than other places, and I loved it. I got to be fully independent.

I'm thankful to my daughter for showing us how to navigate Boston - things were easier when she was with us. We did get to go on the swan boats with her, see the tulips with her, and she introduced us to the Back Bay Fens. Watching my daughter comfortably navigate the city made me feel she really does belong there. I'm excited to go back to visit, to see some of these places again, and to find new places to explore. Boston seems to have endless exploring possibilities. And in May, there are flowers on trees everywhere - it's fantastic.

Walking across a bridge in Boston 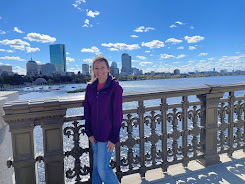 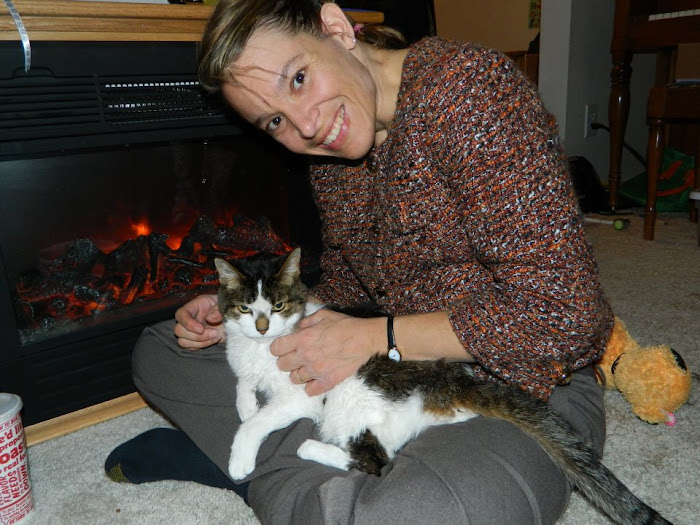 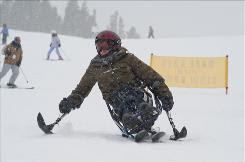 Heaven on the slopes with Lori - February, 2009 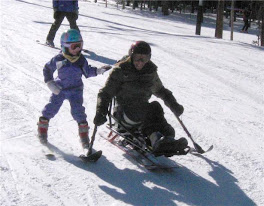